Cranberry Orange Barley bars are bursting with a bright and fresh flavor. Barley and Greek yogurt make them a healthy and filling snack, or a great grab-and-go breakfast. This recipe has been kid approved!

We all know and love granola bars, and the star ingredient is usually oatmeal. Since barley reminds me of a plump version of oatmeal, I knew I wanted to try to make a barley bar. After a few experiments, I developed this Cranberry Orange Barley Bar and was pretty satisfied in how they turned out.

I knew it was a sharable recipe, however, when my kids tried it. One said, "LOVE! LOVE! LOVE! Will you put it in my lunch tomorrow?" The other one didn't say anything, but she took a bite, closed her eyes and made a small moan. (The other one didn't get one because she refused to take even a small bite of dinner).

Why use Barley instead of Oats?

Using barley instead of oatmeal ups the bars' nutritional value. Barley has over 3 times the amount of fiber that oatmeal does and double the amount of protein. Therefore, these bars make a great snack to fill you up quickly and keep you feeling full longer.

A cup of barley does have about 50 calories more than a cup of oatmeal. So keep that in mind if you're counting calories. However, even though it has more calories, you will probably end up eating less (see paragraph above).

Sold on barley yet? If you want to learn more about this healthy whole grain, check out "A Complete Guide to Cooking with Barley." 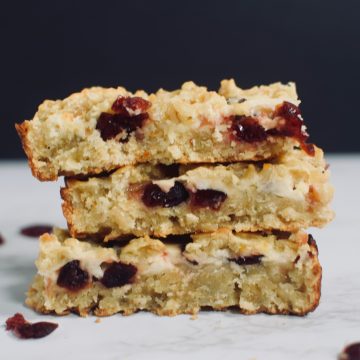