Barley is great in soups, salads and for breakfast. Follow this complete guide to cooking with barley to learn how to use, cook and store this healthy whole grain.

Barley is an ingredient that most people have at least heard of, even if they don't regularly eat it. It is a popular ingredient in many soups, and sometimes it shows up in salads. It is also great in breakfast food. It is a whole grain and very healthy. If I had to describe how barley tastes, I'd say it is kind of like a fatter, chewier oatmeal.

This grain is nonstop.  Barley is jam packed with nutrients:  Manganese, selenium, copper, chromium, magnesium, niacin and other B vitamins.  It’s especially high in molybdenum, which is a nutrient I had never even heard of before.  All of these nutrients mean that when you eat barley, you are going to be helping your body function at it’s best.  Healthline.com suggests that because barley has so many nutrients, it can help reduce or prevent gallstones, prevent certain types of cancer, lower cholesterol, and protect against diabetes.

Barley also has a great amount of fiber, which helps keep your digestive system working properly. The high amount of fiber also makes you feel full longer, which means it could help you lose weight.

This whole grain does contain gluten.  If you are person who has celiac disease or gluten sensitivities, barley is not for you.

You may come across barley in a few different forms.  Let’s explore them.

Barley also comes in a few other forms, but it’s unlikely you’ll come across them unless you are in a specialty store or searching online.

1 cup of dry barley makes about 3 cups of cooked barley.

Barley does not need to be soaked before cooking, however, it is a good idea to rinse the grains.  This removes any dirt or extra starch that is on the grain.  Like so many other grains, the way to make barley is to add water and heat.  The water is absorbed by the grain and becomes soft.   There are many ways to do this, and it really comes down to preferred method.  Here are some links to a variety of ways:

How to Cook Barley in the Instant Pot

Uncooked barley can be stored in any airtight container.  I keep mine in large mason jars, but any type of Tupperware or storage containers work fine.

Barley can be cooked in large batches and then frozen for quicker use.  Put smaller portions into vacuum sealed or freezer ziplock bags, which can be stored in the freezer for up to 3 months.  Just make sure it is completely cooled before doing this to prevent freezer burn. 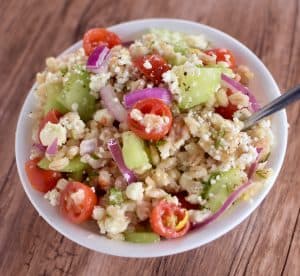 Thank you for reading this guide to cooking with barley. I'd love to hear your favorite way to eat barley. Tell me in the comments or find me on Facebook! Can't wait to discover some new recipes from you.